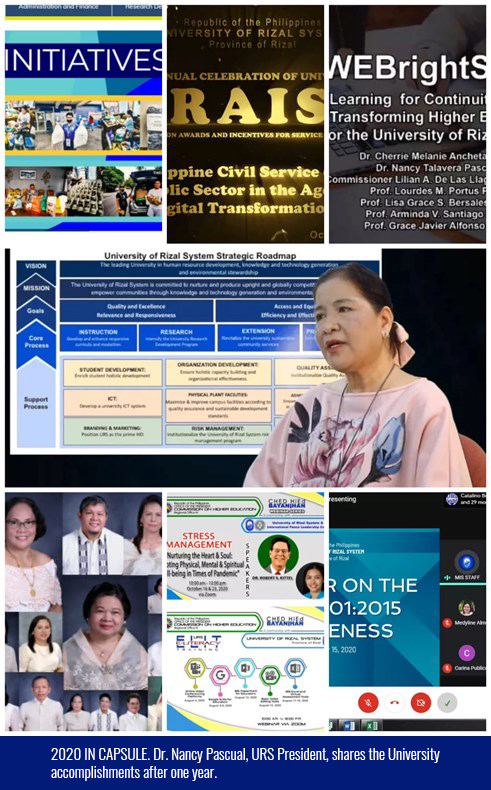 Dr. Nancy Pascual, President of the University of Rizal System (URS) reported on the University’s accomplishments after one year being the third URS president.

The report was made via the online Mass Offering and Thanksgiving Program on February 24, the day that marked her first year anniversary as president.

In the report, she underscored the accomplishments of her administration within the year. The WEBrightShop sponsored by the University in collaboration with the UP Open University cited a total of 7,988 modules consistent with the URS continuity plan in time for the New Normal. Other webinars and retooling initiatives were likewise done to answer the call of the time. Besides the training for its constituents, URS has likewise given its share to train others as its faculty served as re-source persons in the CHED HiEd Bayanihan 1 and Bayanihan 2.

Because there was a pandemic, URS had to launch an information campaign to establish awareness among its staff and faculty and its stakeholders in general. Periodic campus disinfection in cooperation with the Municipal Disaster and Risk Management Office (MDRRMO) of the municipalities has been done. Psychosocial aids were also given to some. Relief distributions were initiated by the University with the help of its alumni federation. A total of 16,609 residents, 8823 families, 2704 front liners, 578 URS employees, and 304 students were benefited. URS has likewise sent during the pandemic – 57 students back to their provinces, 4 students in Papua New Guinea, and 2 in Vietnam.

The University has also signed a tripartite agreement with the DOH and the Province to have URS as a quarantine center. Alternative work arrangement for faculty and staff has been followed to continuously do the tasks expected of everyone.

URS has passed the second ISO survey audit for Morong, Tanay, and Rodriguez campuses, the first survey visit for Angono, Binangonan, and Antipolo, and held the ISO orientation for Taytay and Cainta.

Also, the University has been ranked as one of the top civil engineering and electronics engineering schools in the country as shown by its percentages of passing the board examinations.

Research development, extension, and production activities were likewise pursued. Research and extension congresses were held while production initiatives like the One Campus One Product and the Panalo Cara-van were able to generate extra income for URS. Other initiatives like the URS – KAYAKAPP extension project aided the victims of Typhoon Ulysses. To top it all, a total of 18 researches made by 22 faculty researchers were published in the Scopus-indexed journals such as the Solid State Technology journal and the PalArch’s Journal of Arche-ology of Egypt/Egyptology.

The celebration of the 19th URS Founding Anniversary with the theme, URS: Overcoming Challenges, Strengthening Resilience and Sustaining Excellence in the New Normal, was accomplished on August 11. Loyalty, career, research, and extension awardees were recognized in the 15th Annual URS Program on Awards and Incentives for Service Excellence (PRAISE) on October 23. Araw ng Pagpapahalaga sa mga Guro was held on November 20. Bonus incentives in the form of communication allowance (P2500) year-end incentive (P3000) performance evaluation incentive (P5000) collective negotiation agreement benefit (P19900) SRI (P10000) or a total of P40450 were likewise given to URS personnel. Institutional evaluation of faculty and staff for promotion hopes to fill up 85% of vacant positions in the University.

The URS president, Dr. Pascual was likewise nominated to participate in the 2020 Korea International Cooperation Agency (KOICA) Capacity Building for Higher Education: Policy Making Course on November 4 – 13. She is presently attending the Asian Institute of Management – CHED Global Academic Leadership Program (CHED GALP) for state universities and colleges presidents and CHED central and regional directors. . Similarly, URS has contracted the First Pacific Leadership Academy (FPLA) to establish its roadmap at least for the next 10 years to come. A strategic planning workshop with the theme, URS: Conquering the Waves of the New Realities towards Becoming a Renowned University of the Future was held in September.