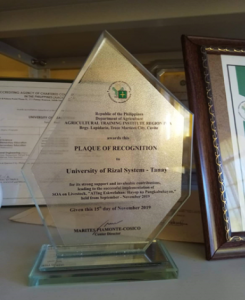 “ATIng Parangal is a triennial activity of ATI Region IV-A which aims to give awards and recognition to the pillars of extension that have exhibited exceptional support to the programs and projects of the Center” according to Ms. Abegail del Rosario, Project Officer, during an interview.

Various recognitions were given to seven (7) different categories such as the “Mga Kaagapay na Pambansang Unibersidad” which includes URS among other 6 state universities.

About 200 guests and awardees joined the celebration. Dr. Marita Canapi, president of URS received the award.